Scriba Volunteer Fire Company Inc.
HomeAbout UsApparatusCPSC RecallsCall HistoryCall VolumeContact UsERGEvents CalendarFilesFire GlossaryFire NewsGuestbookHistory of DepartmentHome SafetyJoin the Fire DepartmentJournalLinksMembersNewsNewslettersPicturesThe FallenVideo
Recent calls
Possible CO Leak
At about 11:00 am a caller requested the fire department respond to Red's Scriba Market for a possible CO leak. On arrival 2702 discovered building occupants complaining of not feeling well. The b...
➠
Strange Odor
On 2/20/21 the department was activated for an odd smell at Red's Scriba Market. On arrival crews noticed a faint smell, thought to possibly be refrigerant. . Oswego County Haz-Mat team was reques...
➠
Medical / Possible Structure Fire
At about 9:20 PM, Scriba VFD was activated for mutual aid to Volney for a structure fire. As 2741 was responding to the call, a second call was received for a male subject that fainted. A second crew ...
➠
Mutual Aid Structure Fire
At 6:07 PM this evening, Scriba was activated automatic mutual aid to Volney for a reported structure fire in an outside boiler spreading to the house. 2741 led by Capt. Merron responded with a full c...
➠
News headlines
911 Addresses
Did you know Oswego County has a law called the "Oswego County E-911 Structure Enumeration Law"?This law allows us to assist you better in an emergency.Paragraph 4 titled "Display of Nu...
➠
Santa Visit
SANTA FIRE TRUCK RIDE UPDATE The Chief's Office has been maintaining contact with Santa Claus in reference to him doing his annual ride through the town on a fire truck. Unfortunately, afte...
➠
Chicken BBQ
Due to the recent pandemic the Chicken BBQ previously planned for this past month was cancelled. Thank you to everyone for your continued support and we look forward to seeing you all at the next BBQ.
2020 Installation Banquet 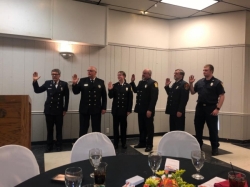 Scriba VFD held our yearly installation banquet at the Oswego Elks Lodge. As always we recognized several members for their dedication and service to the department and our community.Jackie Simoneau w...
➠
History of Department
1949 was a busy year; in January a certificate of incorporation was issued by the State of New York. Fifty charter members held a meeting to adopt a constitution and by-laws and to elect officers.
The first officers elected were:

A new fire truck was purchased and a used truck with 1200 gallon tank acquired. Additional equipment was purchased including a siren. All of this cost the new department approximately $11,000.  A new building was needed to mount the siren that was used to alert member of a call, members did not have pagers or radios like today. Plans were drawn up, studied, and work began and by the end of the year the fire barn was nearly completed. During this time sixty-two new members joined the corporation.
In November the Ladies Auxiliary was formed. Also Chief Louis presented a list of twenty-nine active firemen. During the year of 1949 the corporation transformed from a dream of a group of citizens to full fledged fire fighting outfit with equipment, fire barn, and auxiliary unit.

In the early fifties, the corporation continued to grow. Land was purchased for field day activities. Money was raised by selling bonds, holding raffles, bingo, dances, clambakes, dinners, scrap drives, and finally from donations. A pickup truck and an ambulance were donated to the department.

In 1955 the pickup and ambulance were traded in for a new jeep to be used as a grass truck.

In 1956, the Lycoming school house was purchased as a second station,  a new tank truck and a used fire truck were bought for the station. The corporation continued to prosper and grow.

As the town increased in population and industries, the fire department had to grow with it to provide better fire protection. In 1962, a new fire pumper was bought replacing an older truck.

In 1969, a new fire pumper was purchased to replace another older truck.

In 1971,  a new addition to the fire barn was built to house additional equipment.

In 1973, the jeep truck was replaced with a new truck 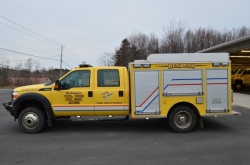 This site has been viewed 125,389 times.
Calls
News
Events
Pictures
Apparatus
Maintained by the members and staff of Scriba Volunteer Fire Company Inc.. Designated trademarks and brands are the property of their respective owners. Copyright © 2006-2021. YourFirstDue Inc. All Rights Reserved. Content on this web site is supplied by Scriba Volunteer Fire Company Inc.. YourFirstDue Inc. cannot be held responsible or liable for any content, text, pictures, or any other media found on this web site.
Management login
Powered by